The quantum uncertainty of spontaneous symmetry breaking during the Big Bang was completely indifferent to the birth of the universe and life on Earth. However, this event produced inquiring minds with many questions, such as "what is mass?"

Understanding the origin of mass is one of the greatest challenges of science. Going back to a tiny fraction of a second after the Big Bang, the four forces of nature began to split apart and an inflationary expansion took place that increased the size of the universe exponentially. Under these extremely hot conditions the fundamental particles began to form and travel at the speed of light. A tiny fraction of a second later, these particles acquired mass through the Higgs Mechanism, thereby creating the Standard Model of elementary particles ( leptons, quarks, and bosons). The moment when the Higgs field went from zero to an average nonzero value is known as the "electroweak phase transition." The transition was similar to liquid water turning into ice. 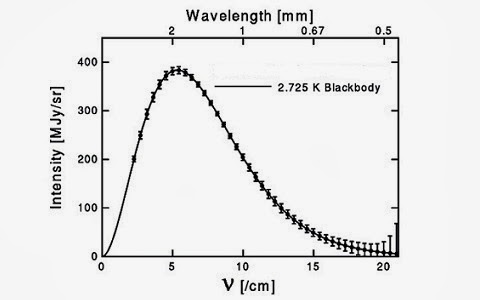 An instant after the Big Bang, the Universe was more symmetric than it is today and during this period, it underwent several symmetry breaking phase changes in very rapid succession.

Ultimately, our ability to find cosmological answers rests on how far back in time we can observe  (Weinberg [1]).   By measuring material compositions and using General Relativity to determine expansion rates, scientists were able to determine how long it took from the Big Bang to the recombination era. When atoms began to form during the recombination era, 380,000 years after the Big Bang, it produced the first time that light was able to travel freely. Now when we look at a star one light-year away, we are actually seeing it as it existed one year ago.

Only 4 to 5% of the universe is composed of ordinary matter. Another 23% is dark matter (exotic non-baryonic matter that weakly interacts with ordinary matter). The 1998 recognition that the universe's expansion is accelerating led to the discovery of dark energy. Dark energy is a property of the vacuum itself (the cosmological constant) characterized by negative pressure (repelling force) causing the expansion of the universe to accelerate.

To solve the cosmological flatness, horizon, and monopole problems, Guth [2] proposed an early era of exponential expansion called the Inflation Epoch where a tiny bit of space was stretched into a far larger region. 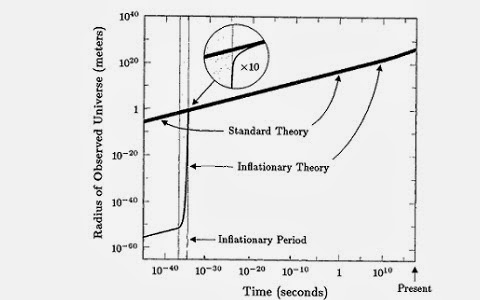 Inflation required a supercooling phase transition that would have started from the state of symmetry of the Grand Unified Theory (GUT)/Standard Model (SM) - before it broke into individual forces. 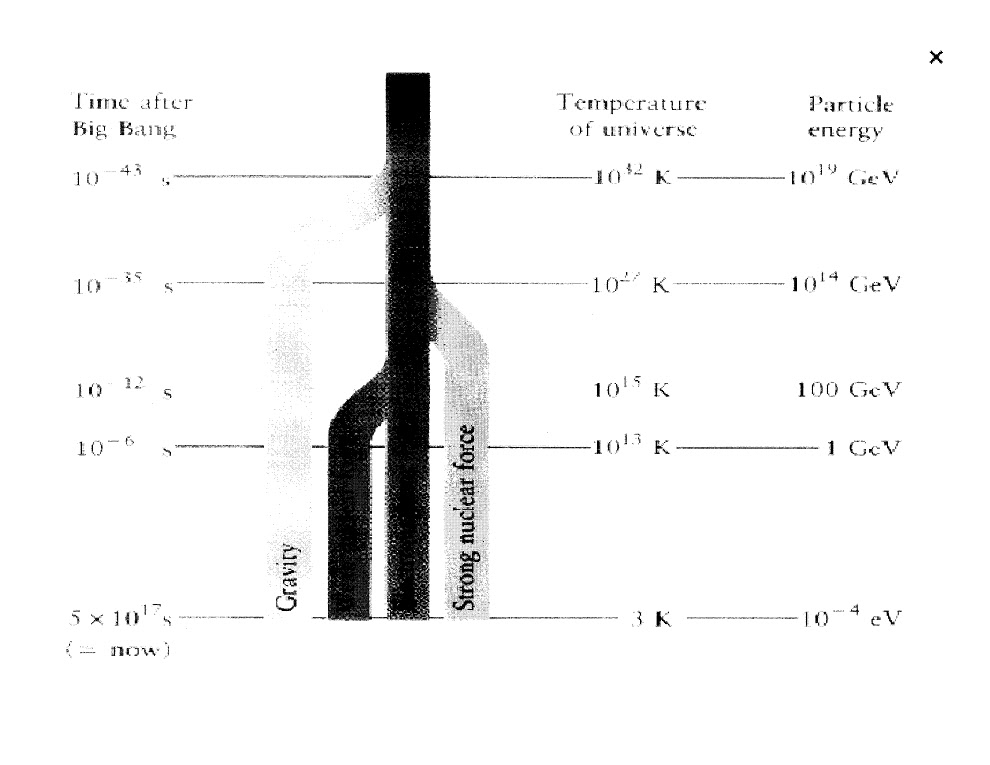 In 1976, particle physics developed the Standard Model of Quantum Mechanics representing the three forces (electromagnetic, weak and strong) as SU(3)C ⊗ SU(2)L ⊗ U(1)Y with exceptional accuracy. Each of the forces in the Standard Model (SM) is a product of gauge theories with complex charges that mutually interact in a highly symmetric way.


The development of GUT was intended to unify electromagnetic, weak and strong interactions of the Standard Model in terms of a single fully unified interaction. While this still left out gravity, it was an excellent approximation to nature.

The SM shows the three forces (weak, strong, and electromagnetic) coupling constants splitting at the point of symmetry breaking. In July 2012, the Higgs Boson (125 Gev) was confirmed. 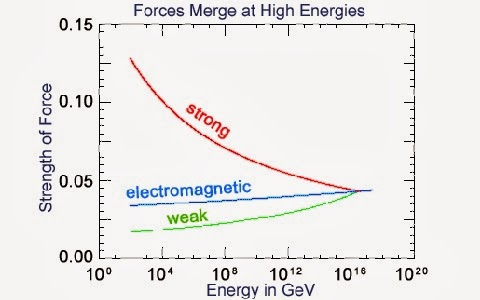 An SU(5) GUT (no longer in favor) could for example break the pattern of SU(5) → SU(3)C ⊗ SU(2)L ⊗ U(1)Y to obtain the standard model (SM). The Higgs mechanism for spontaneously symmetry breaking must include massless Goldstone bosons. 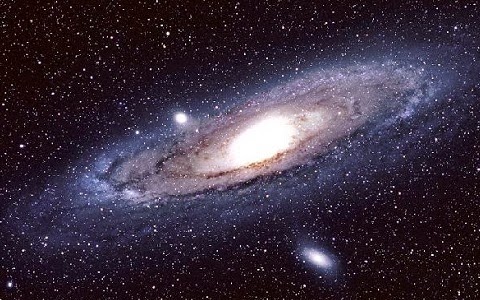 Noteworthy is the fact that not only does inflation smooth out the large scale observables of the universe, it also explains its homogeneity.

The classical path taken by a particle is one that minimizes the action S which is equal to the integral of the Lagrangian over time.

In quantum theory symmetries can take the form of invariance under a unitary transformation. Local symmetries are very important in relativistic physics because they represent quantities like charge and lepton number that are conserved locally. Local symmetries preserve causality if the Lagrangian is invariant under


The Lagrangian for the Standard Model is: 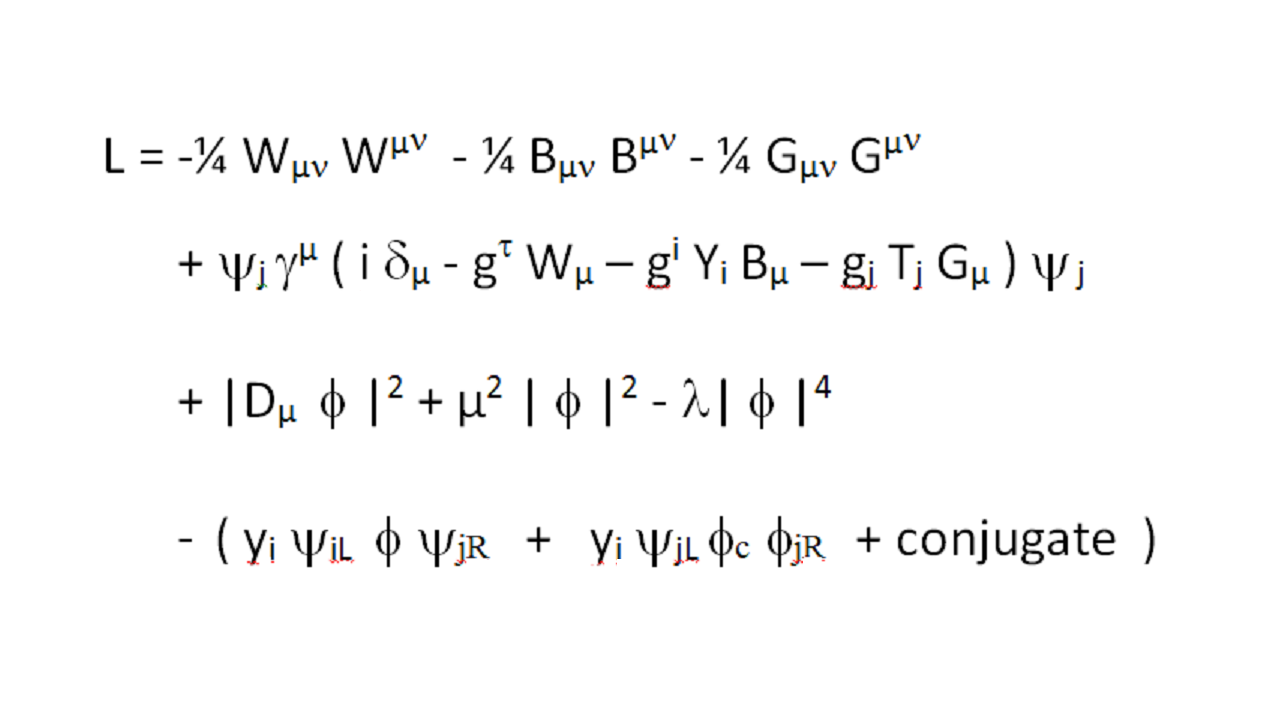 This type of symmetry introduces the concept of spontaneous symmetry breaking. The vacuum state that is the apparent ground state may not be the true ground state. The nonlinear jumping from one state to another state can result from symmetry breaking. For example, if we place a marble on top, right in the center, of an over turned bowl, the symmetry is broken when the marble falls in one direction. The marble may start out semi-stable, but the slightest perturbation, or disturbance, will cause it to roll off. This is because the system is basically unstable.

A massless gauge field A undergoing symmetry breaking results in a massive vector field. In electroweak theory, SU(2) x U(1), this gives rise to massive vector bosons W+-,Z. The mechanism for spontaneous symmetry breaking with a gauge field and local  U(1) invariance is called the Higgs mechanism, after Peter Higgs, 1964. A spontaneous broken symmetry is one that is present in theory but hidden in the equilibrium state. The symmetry is unbroken when all Higgs fields have a value of zero, but the symmetry is broken when all the Higgs fields acquire a nonzero value.

The singularity that broke symmetry and changed one force into four (gravity and SM forces) occurred in stages starting at 10 E16 Gev (10 E-39 seconds) after the Big Bang. The original single force coupling constant changed into four coupling constants that began to diverge in value.

With the second phase transition postponed until after supercooling, a false vacuum was created. The false vacuum would be the result of twenty four Higgs fields intersecting (representing 12 Leptons, Fermions and their anti-particles, and 12 force particles (photon, +-W, Z, and 8 gluons)). Exactly when the various Higgs field come into existence during the symmetry breaking process is not known. This phase transition was a 1st Order Phase Transition (like boiling water with supercooling) which occurred from 10 E-37 to 10 E-35 seconds. The expansion doubling time was 10 E-37 seconds. The false vacuum  produced a neg. pressure repulsing gravitons to make the cosmological constant increase the size of the universe by a factor of 10 E30. The supercooling phase transition that followed caused Inflationary expansion of the universe. Inflationary expansion proceeded at faster than the speed of light. During this time the universe grew from the size of a proton to the size of a baseball in a flash. (Today, the observable physical universe is 93 billion light-years in diameter.)

The matter-antimatter ratio became slightly imbalanced and matter became slightly dominate due to cooling shutting off prior to baryon neucleogenesis reaching equilibrium (10 E78 baryons now in the universe).

To help visualize the elements of the Standard Model, it is useful to think of an electron as a matter wave - (a Fermion with spin 1/2) and a photon as an energy wave (a Boson with spin 1). A photon, even though it is massless, feels gravity by E/c^2 and it is the only particle that is an exception to relative motion - always travels at the speed of light, c.

General Relativity is an extremely accurate theory for gravity but is classical and does not include quantum effects. As a result, the inability to reconcile it with the Standard Model is due to the appearance of infinity expressions that cannot be renormalized.

So then what can we say about mass?

Mass is the differential energy left over when disturbed fields attempt to cancel out the disturbance to get to the minimum energy state. For example, The disturbance of quark's color charge can be nullified by an antiquark of opposite charge nearby (or by complementary colors in a proton) however due to quantum effects the cancellation is incomplete and the residue constitutes the resulting mass.


A ‘singularity’ is a point where mathematical models are no longer valid ‒ for example: a point divided by zero is undefined. The theory of singularities examines mathematical manifolds in an abstract space to gain a topological representation of the region near a singularity.

In the 1960’s Rene’ Thom proposed a nonlinear mathematics approach to describe singularities called Catastrophe Theory. Thom classified the bifurcations based upon their potential function and its derivatives. The morphology of solutions is determined by values of the potential’s parameters. In the special case of gradient vector fields, the mathematics results are called Elementary Catastrophe Theory (ECT) Gilmore [3].

Gradient vector fields are interesting because nearly all trajectories on the behavior surface tend toward a point attractor and the attractor minimizes the potential function V of the system. The parameters determine the locations of the relative minima. A smooth change in the parameters can give rise to a discontinuous jump on the behavior surface.

Thom found that under stable conditions there are exactly seven elementary catastrophes if the potential function has no more than two parameters. The most illustrative is the Cusp Catastrophe with a potential of:

Outside the cusp region there is only one extrema value for x. Inside the cusp, there are two different values of x giving local minima of V(x) for each. Nonlinear variable discontinuous jumps occur at the cusp boundary.

Cusp shape in parameter space (a,b) near the catastrophe point shows the locus of fold bifurcations separating the region with two stable solutions from the region with one.

But the bifurcation curve loops back on itself, giving a second branch where the alternate solution loses stability and jumps back to the original solution space. You can observe hysteresis loops as the system follows one solution and jumps to the other.

Consider if one holds b constant and varies a to follow path 1 or 2. In the symmetrical case b = 0, a pitchfork bifurcation occurs as a is reduced. One stable solution suddenly splitting into two stable solutions and one unstable solution as the physical system passes to a < 0 through the cusp point (0,0) (spontaneous symmetry breaking). Away from the cusp point, there are no sudden changes.

Classical phase transition theory is naturally modeled in Elementary Catastrophe Theory ECT. The general family of potential functions depending on state variables, or parameters. The first series of applications of ECT deals with thermodynamics phase transition. Ginzburg Landau second order phase transition  relate the critical point of the fluid to the cusp catastrophe. We will show it similarly relates to Big Bang Inflationary Theory universe.


We let the state of the physical system be described by the value x that minimizes the potential locally. The physical system is then reduced to a study of equilibrium and stability properties of the potential function V(x,c). The first derivative of the function is equal to zero at equilibrium and the second are shown greater than zero indicating a local stability as well as the critical values of the stable equilibrium branches.

In general the potential function the will have only isolated critical points. A phase transition occurs when the point reaches this state of the physical system jumps from one critical branch to another.

The potential function V(x) for the standard GUT with finite-temperature effective scalar potential Carroll [6] and Albrecht [7]: 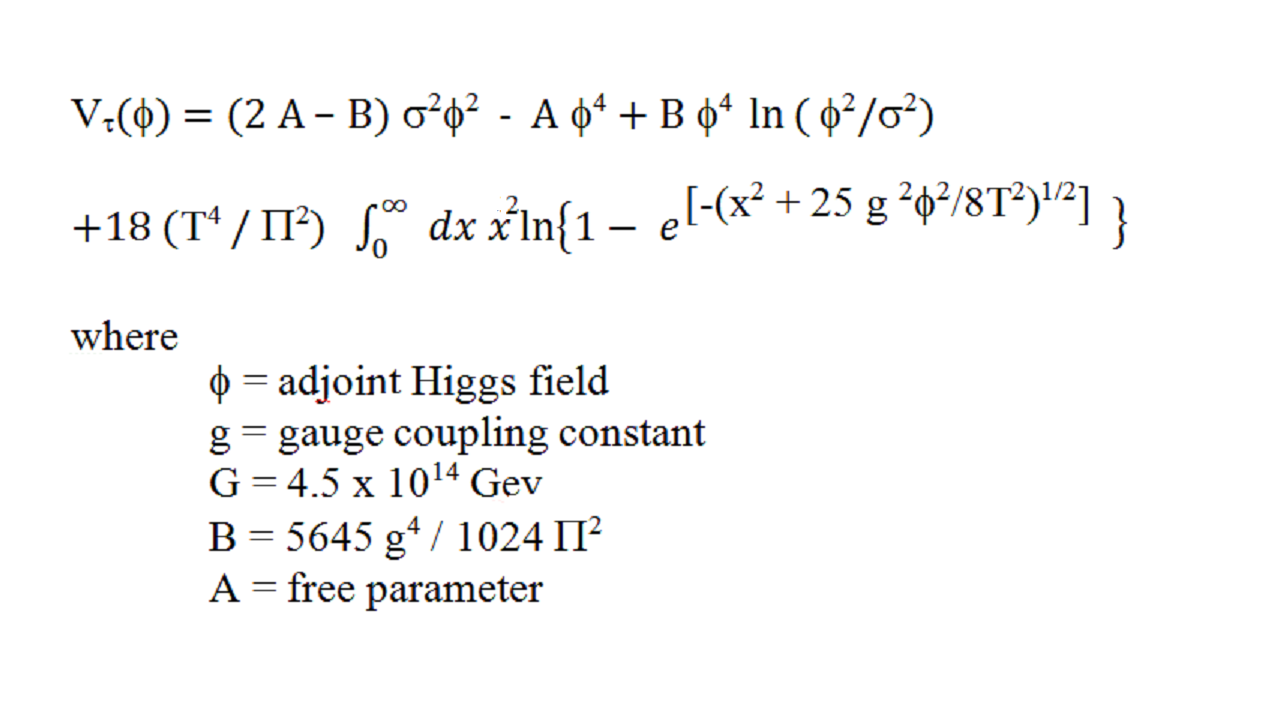 where this potential can be mapped into a Cusp catastrophe by first taking the Taylor series expansion of the natural logarithm terms, then gathering Higgs fields terms according to their exponent and grouping like terms. Then following renormalization rules, create counter terms and eliminate divergences. The result is a Cusp x^4 theory.

where x represents the Higgs field, and

a and b are combinations of A,B, g.

The value of the Cusp catastrophe transformation is the clarity of an illustrative image of the non-linear behavior of the phase change and the potential of refining the vacuum value based upon the new parameters. The characteristics of a nonlinear JUMP from one solution space to another within the bifurcation cusp show alternative to quantum tunneling.

The S-shaped nonlinear jump of the ECT Cusp is characteristic of the S-shaped jump we find in Inflation Theory .

The concepts expressed in this blog are further illustrated in the app: Cosmology App.